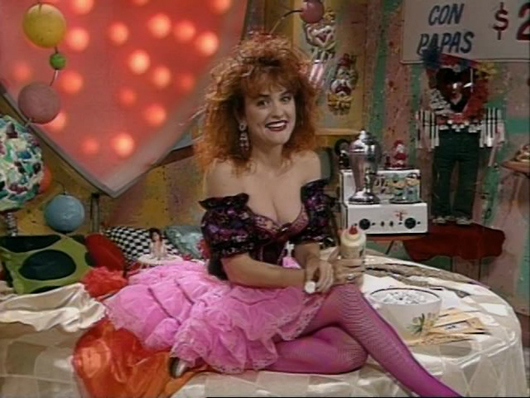 HELLO I AM BACK FROM MY HOLIDAY HIATUS. Miss me? I know I did. And I have even more great news…it’s time to celebrate the FOUR YEAR ANNIVERSARY OF AGENT LOVER!!!!Can you believe it? But PLEASE keep your clothes on for now. We will get more into that later! Right now, we will honor my #1 Valley Girl style icon…..JULIE BROWN!!!!!! And no, tis’ NOT Downtown Julie Brown (who OBV I love too) I’m talking about the “hottest little henna head on MTV!” You probs remember Julie from my 2009 Earth Girls Are Easy post, but some of you might have known about her amazing MTV show,  Just Say Julie! , which ran from 1989-1992. 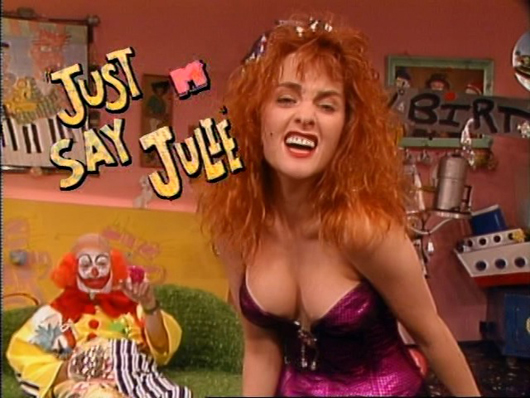 When my soul is not transporting itself through time and space, hovering between the candy-colored rooms of the Madonna Inn, the Haunted Mansion at Disneyland and John Stamos’ shower… it time travels to the set of Just Say Julie. The show had Miss Brown hanging out in this amazing Pee Wee’s Playhouse-type space, introducing music videos, talkin’ shit about the popular singers of the time, sassin’ up her guests and basically just acting like a cute ball of craylariousness.  One of the biggest reasons why I wish I could astral project/time travel to this time is not only because I want to hang with Julie but there were even MORE brilliant minds involved. The set was designed by Allee Willis who is probably my aunt in another dimension. She has a museum of kitsch (!!!) and collects lipstick-shaped things! I want to talk a lot more about Allee Willis, but I think she deserves her own post! Then there was the costume design. As you can see, Julie’s outfits were brilliant! I wish I could see these dresses and accessories in person! The designer was none other than Mona May, who I had the pleasure of meeting a few years ago. Mona was the costume designer for Clueless aka the reason for most of our EVERYTHING. Obviously, this is some triple-threat greatness right here!

So please take a great gander at the set design and costumes in the screencaps below. And take your time boo, we don’t gots to rush…. 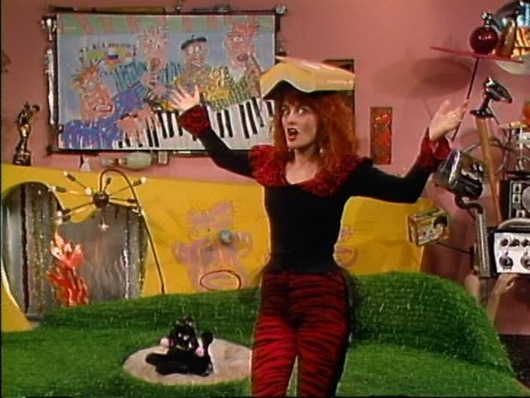 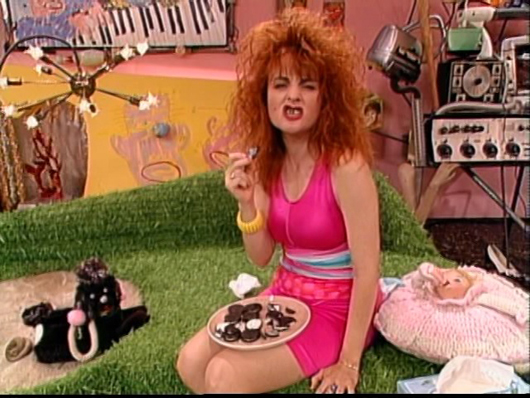 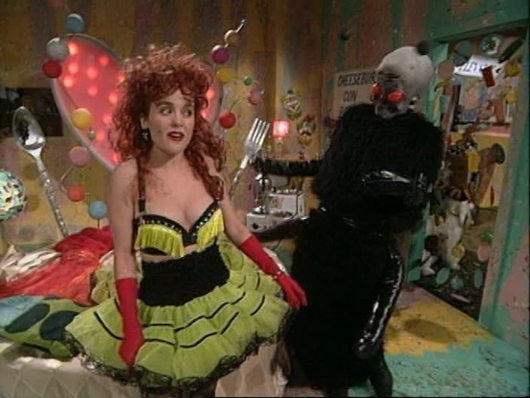 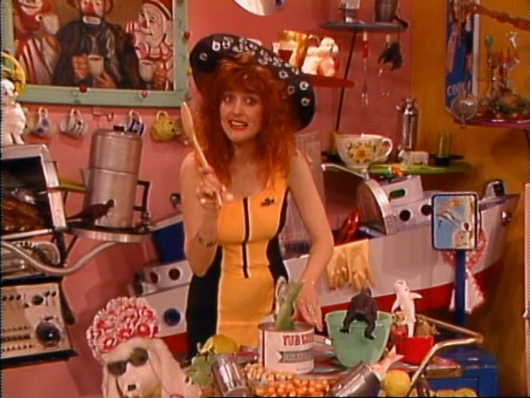 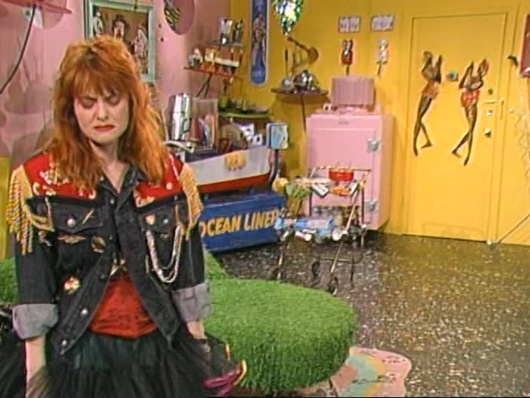 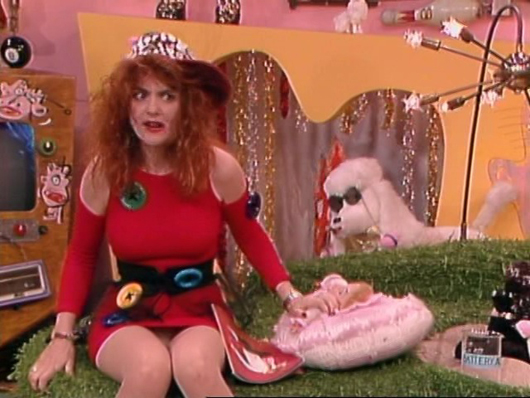 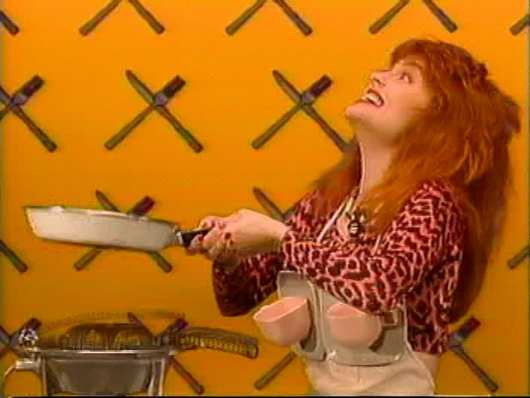 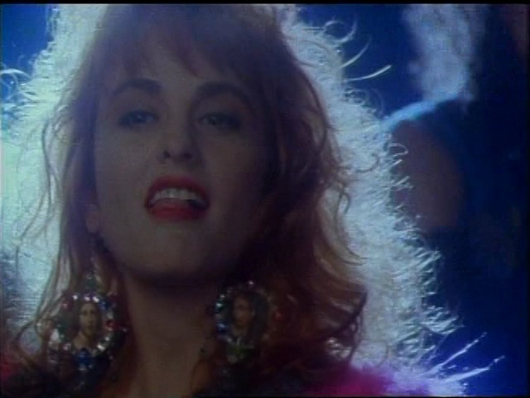 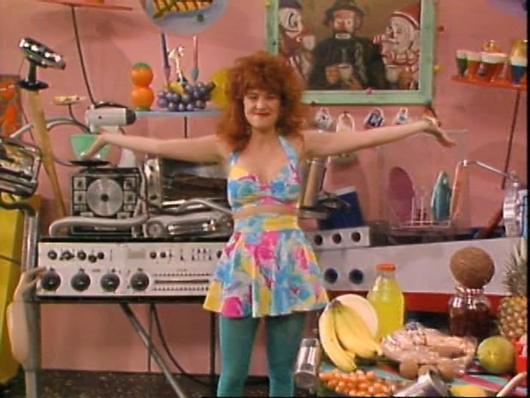 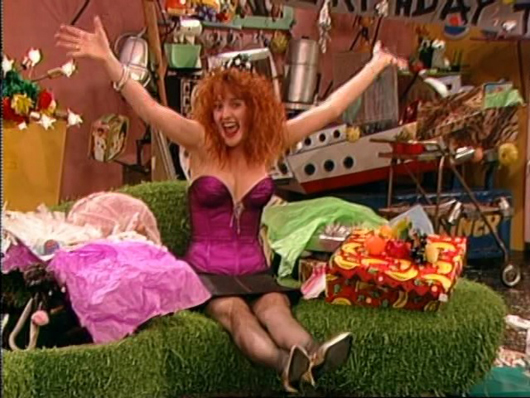 THIS SHOW IS BASICALLY MY LIFE’S DREAM!!! Who knows someone at MTV? Can I be the new Just Say Julie? “JUST SAY RIE RIE?? Make my dreams come true and allow this cleavage of mine to blast through your homes and into your bedrooms. GULP 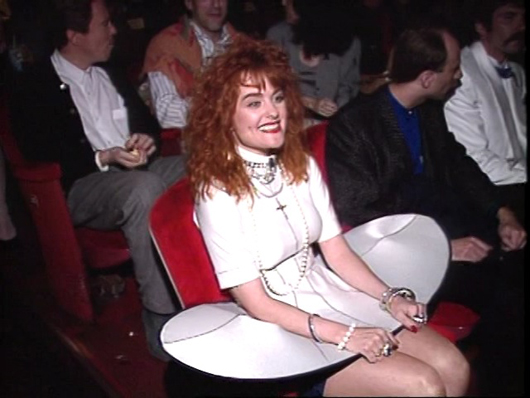 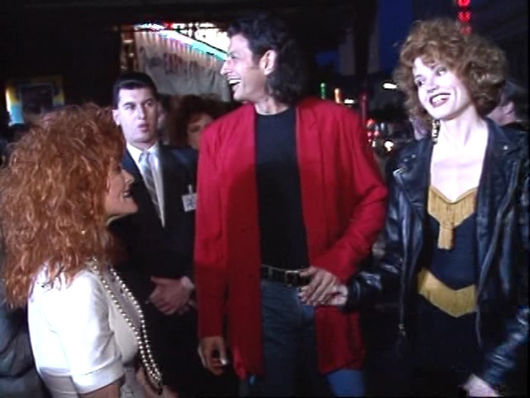 SPEAKING OF DREAMS…OBVIOUSLY I HAD TO SNEAK IN A PICTURE OF MY BELOVED GOLDBLUM!!!!! There he is with his ex, my other favorite redheaded slash talented Olympic archer, Geena Davis. THEY ARE SO TALL! Like two sexy trees! 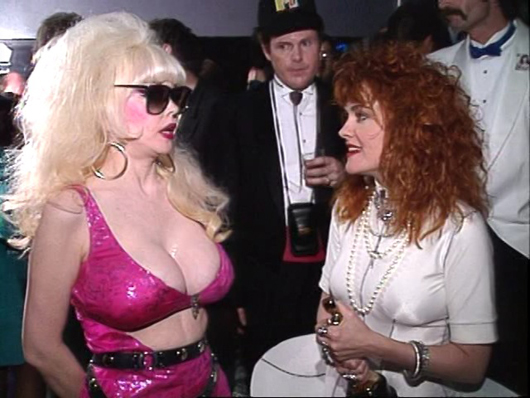 And here she is with Angelyne who I’m still not sure why I don’t carpool with. I’d definitely save a lot of gas if she’d give me a ride. I wonder what’s in her famous pink Corvette. Is it OCD spotless with strawberry air fresheners hanging inside? Or do she gots Taco Bell wrappers all over the floor (like Queen Latifah TRUE STORY…)? Does she have a dual CD player/tape deck like yours truly? Does she sing along to tunes while she drives? These are the things I think about when I see Angelyne driving around. 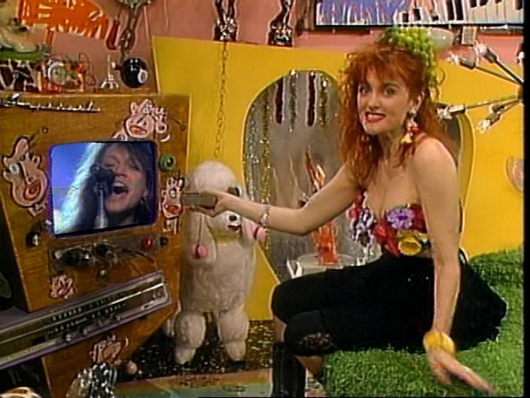 Julie and I are SO alike btw. Not only do we have magnificent cleavage, but we are also both OBSESSED with certain DREAMHUNKS! Julie always talks about Jon Bon Jovi on the show and of course my wee crush on the man some people refer to as Uncle Jesse…but I refer to as SIR STAYMOIST. 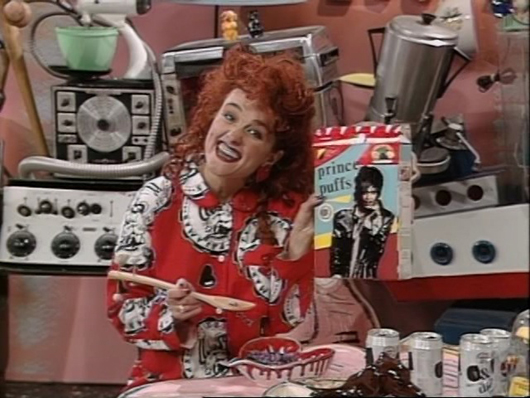 YOU GUYS! She even has PRINCE CEREAL… 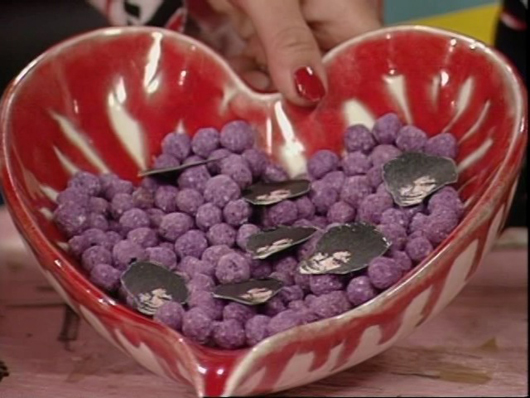 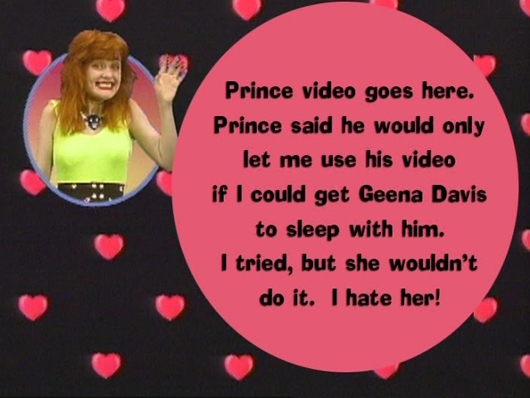 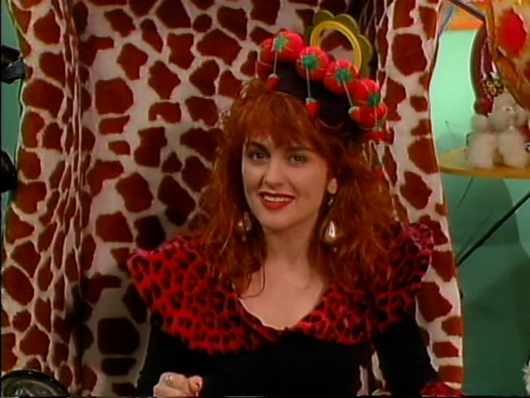 I had an idea to make a pincushion hat…THEN I SAW THIS. 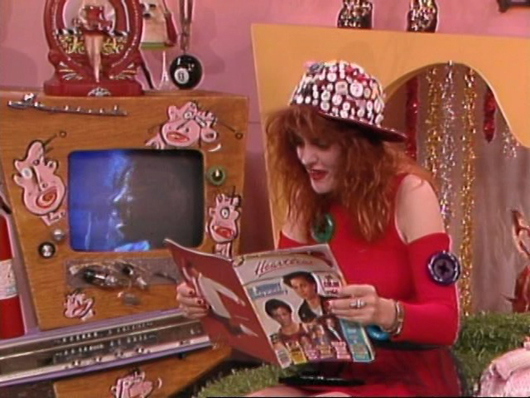 You can always catch her fawning over hunks of life like I do. Should we just start a Ladyboner Magazine already? Like a Bop Mag for us grown ladies??? ADD IT TO MY LIST 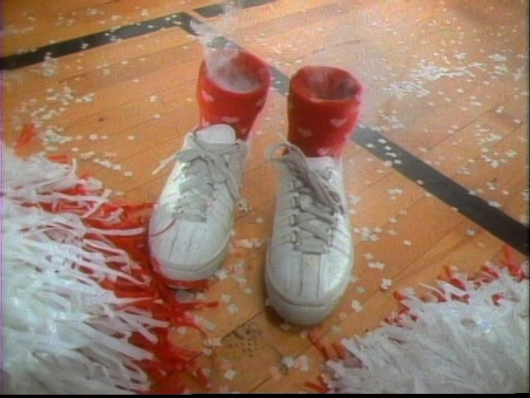 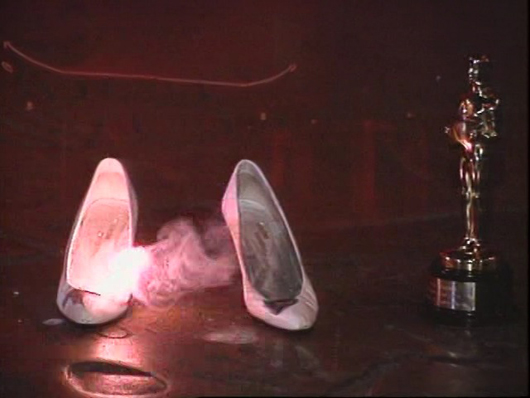 And Julie also appears to be into one of my favorite sight gags….smokin’ shoes! THIS ALWAYS KILLS ME DED! I am a simple man I tell you.

You can catch up with what Julie’s doing now on her website and check out her album Smell The Glamour!

AND NOW…..A SPECIAL PRIZE! Because I love to spoil you ROTTEN, and to kick off the many more things I’ll be giving away in the next couple of weeks as we celebrate our 4 years together, I’m giving away a Best of Just Say Julie DVD! Just leave a comment and I’ll draw at random  next week! Good luck!