THAT’S RIGHT GUYS…I have NOT bailed on my Valley Girls Appreciation “Week” for one second. Without being all “La Excuses,” (my new chola name) sometimes I take a lot longer on movie posts because I like to freshly screencap everything myself. CALL ME OLD FASHIONED, but this is why my friends get pissed at me for not watching their golden scroll of “Marie you better watch this or else!” Netflix movies right away. It’s basically because I am screencapping deep into the night for us! I’m sorry I’m not morally corrupt like the rest of the godforesaken Internet and use any old photo that floats my way! Ok, I know sometimes we have to but that is my last resort, PAPA ROACH! Anyway…BACK to the matter at hand….. 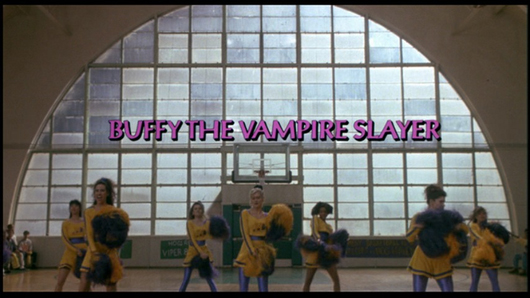 Buffy The Vampire Slayer: THE MOVIE…

I know we all loves to loves the TV show but that and the film were obviously two totally different things. Nobody ever talks about the movie so Rie-Rie has gots to. I can’t help it if my heart has a special place for the OG film starring Kristy Swanson and one COY LUTHER PERRY, and yes that is the real-life, government name of Dylan “Mad, Bad and Dangerous to Know” McKay! 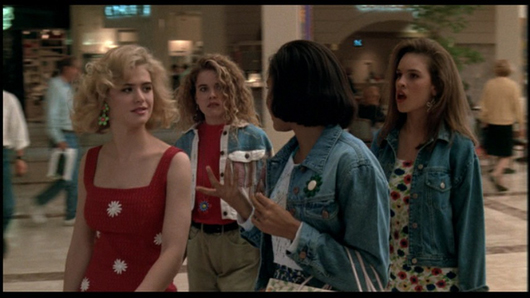 Buffy was a shallow, teenage Valley Girl who spent her time shopping at the mall with her friends and engaging in cheersex with her basketball jock boyfriend…that is until Merrick, played by DONALD SUTHERLAND, declares her to be a Chosen One!!! A SLAYER! 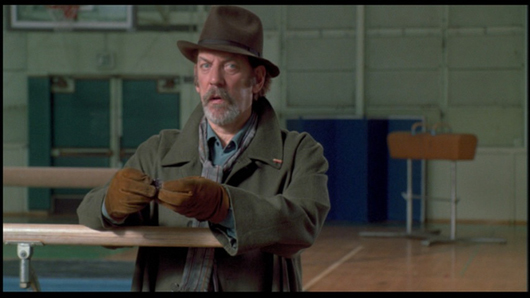 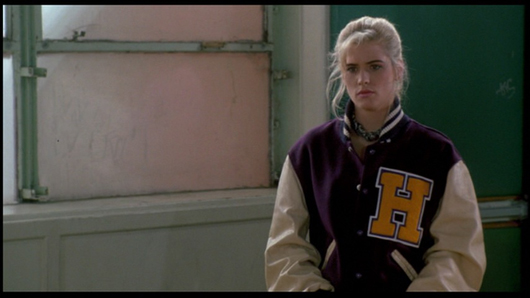 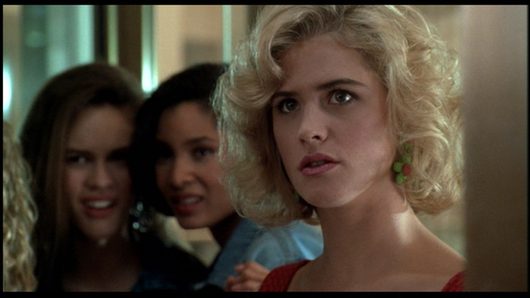 Could it be true? Am I the only hope for the imminent war between us and the undead? YA BEST BELIEVE IT MY DAUGHTER…. 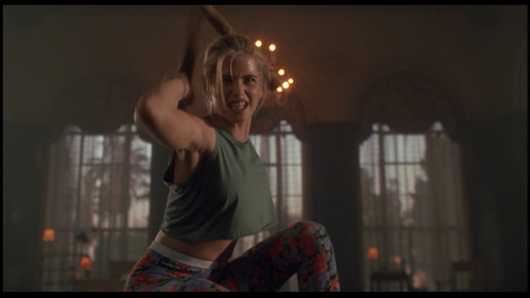 Buffy soon starts to train for her role as Slayer! Let me just tell you all something right now. It really bums me out that Merrick is probably never going to come to my door and be like, “Marie, those two moles on your nostrils are a sign that you are a Chosen One. YOU ARE THE SLAYER!!!” and throw a corn on the cob at me which I will catch in between my teeth with cutthroat precision. Real life totally sucks, man. I’m going to have to turn this BS into lemonade and just pretend I am the Slayer during training sessions at my gym. Perhaps that will help me get through those MISERABLE planks. 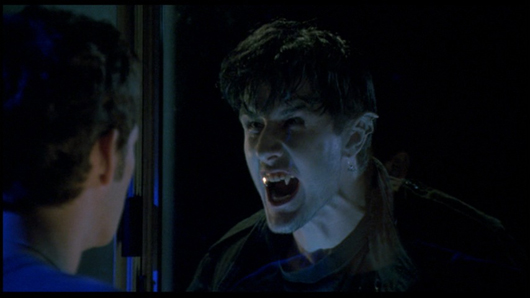 Good thing she’s learning to fight because David Arquette is HUNGRY 4 BLUD. Pee Wee Herman is in this as a vampire too! 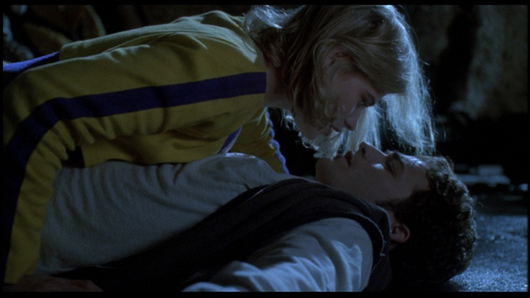 Buffy and Pike are one of my all-time favorite movie couples. They are similar to Randy and Julie in Valley Girl because Pike is from the punk rock side of the tracks and Buffy is Miss Popular. But they have an undeniable chemistry, and soon fall in matching-plaids love… 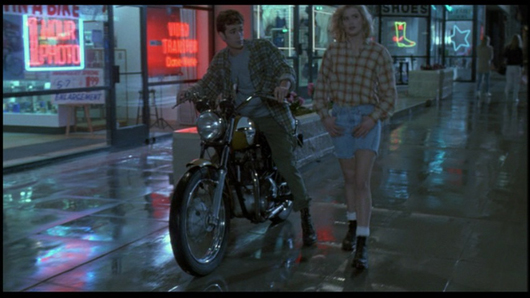 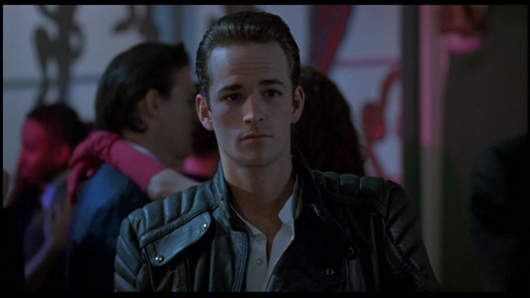 Yes Luke I still love you and your washboard forehead abs! 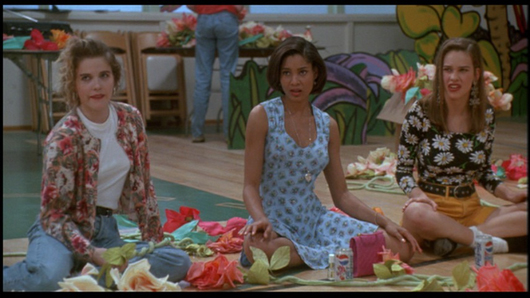 Buffy’s friends are such assholes, but I’m seriously into these 90’s fashions. I need all three of these above outfits. And that daisy top (most likely bodysuit) …BETSEY JOHNSON DATCHU??? Can anyone confirm? Sure looks like it. 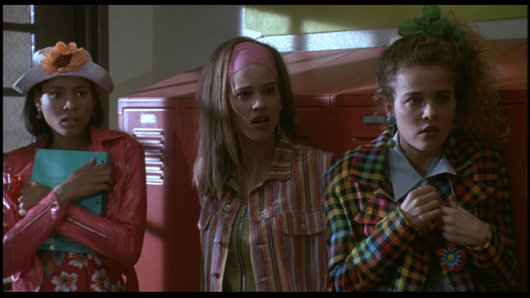 Into the rainbow plaid blazer on the right…. 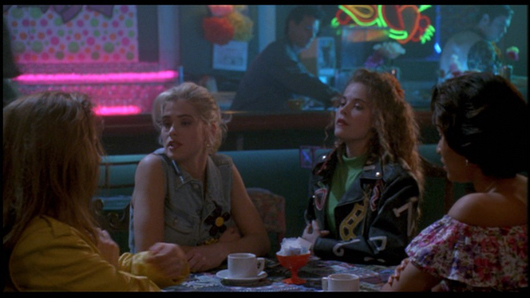 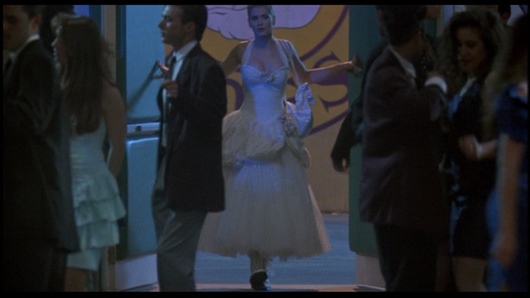 And then there was Buffy’s prom dress: a white halter gown (worn with boots!) which kind of looked like a wedding cake topper until later when it was ripped shorter and worn underneath Pike’s leather jacket. I remember seeing that combo for the first time and being BLOWN AWAY. This spontaneous juxtaposition in her outfit was so EYE-OPENING for me back then. I mean I was eleven and barely learning how to put together an outfit so this was like “WHAT! A FRILLY DRESS AND A MOTORCYCLE JACKET!” Maybe that’s why I wore a fancy princess dress and Docs to my own prom years later. Maybe that’s why I still really like that kind of look today. EVERYTHING IS ALWAYS BECAUSE OF A MOVIE WE KNOW THIS 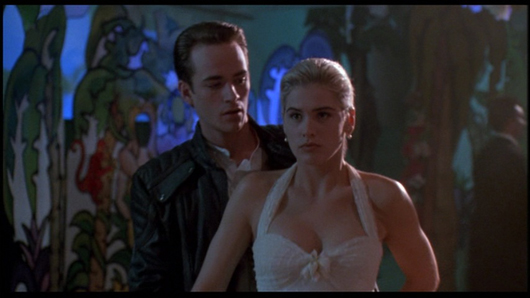 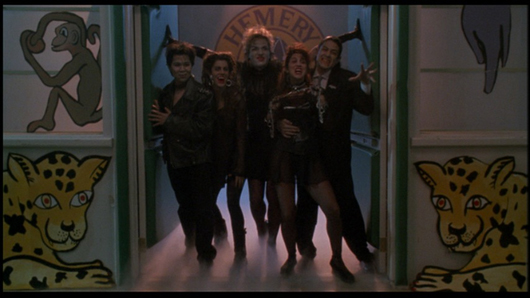 This part with the goths just KILTS ME DED each time…. 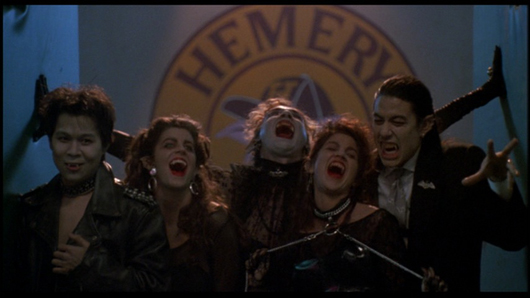 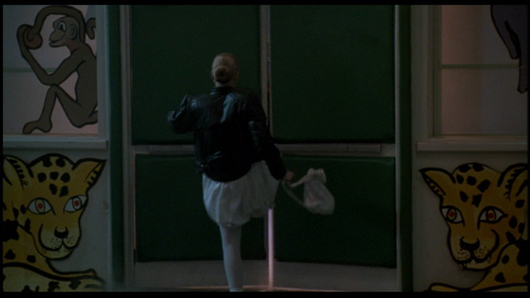 One time I went into the bathroom at the Northridge mall and kicked all the doors open like this because I was all germaphobe and it was disgusting. I didn’t know there was a couple of cholitas in there and one of them was threatening me outside of my stall when I was taking a pee. I pretended I didn’t speak English and she left… 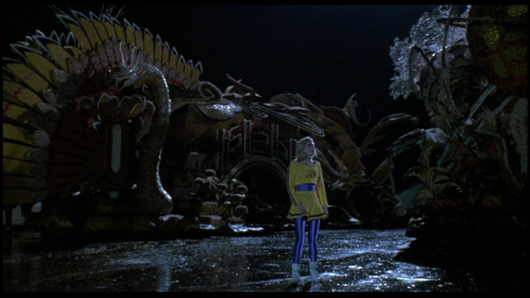 If you haven’t watched this original work of art, do so ASAPINGTON. It seriously has the best Valley girl-esque lines ever so LISTEN CAREFULLY then out of the blue tweet me, like “All I wanna do is graduate from high school, move to Europe, marry Christian Slater, and die. Now, that may not sound too exciting to a stonehead like you, but I think it’s swell. And then you come along and, and tell me I’m a member of the hairy mole club so you can throw things at me? I don’t THINK so!”