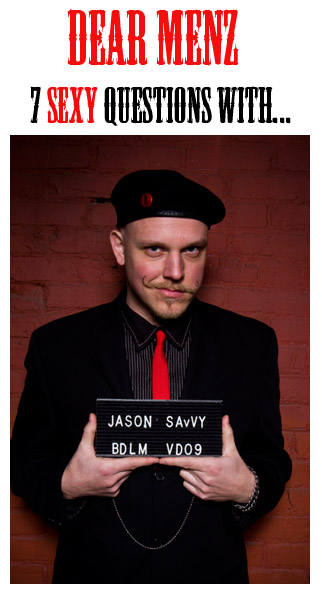 HEY LADIES!!! (deep voice) Summertime is just around the corner, can you feel the heat coming? I can. So it’s about that time we ask one of our Dear Menz to help us get a handle on all the hotties heading our way.

Jason Savvy is a moustachioed man of many hats. Not only is he an accordionist for LA’s own avant-garde 24-piece gypsy jazz band, Killsonic, a talented DJ, and a creator of international dance party night, Malabomba!, but he’s also a taco aficionado and the person to blame for my escalated taco obsession. Jason started the taco tally last year and I was the lucky cochina puta to present his 69th taco. (He’s on taco #92 for this year in case you are wondering.) The ladyboner-inducing Jack Kerouac quote posted on his myspace (“the only people for me are the mad ones, the ones who are mad to live, mad to talk, mad to be saved, desirous of everything at the same time, the ones who never yawn or say a commonplace thing, but burn, burn, burn, like fabulous yellow roman candles exploding like spiders across the stars…” ) is the cherry on top because really, anybody who lives by a quote like that is a hottie boom-bawty bawty. Today Mr. Savvy offers us ladies some insight into the mad, mad world of our opposite sex…

What is something a woman can wear that makes her irresistible to you?

Apparently, based on my track record, a straightjacket.

Have you ever encountered a bad kisser? How do you deal with it if you like the person, but they are a bad maker-outer?

I have been lucky. I have never really encountered bad kissing, perhaps just average to mediocre lip-mashings. The way I deal with it is to remember, “Hey, this may not be the best make out sesh ever, but at least I am making out.” Before growing this moustache, I was an ace maker-outer, but then I decided to sacrifice comfort for style. This presented me with a conundrum. That is, the handlebar attracts significantly more attention from the ladies, but is also scratchy and coarse on their delicate faces once I have tricked them into making out with me using my dubious charms. I don’t even want to talk about how the handlebar curl is prone to trespassing into the nostril of the girl I’m kissing because that is just gross and embarrassing for everyone. Come to think of it, I hope to the sweet baby Jesus that no one has a bad kisser story about me because of this unfortunate tendency. What is something you’ve always wanted to do with a significant other but haven’t had the chance to yet?

Three people you would want to play a good old-fashioned game of Spin the Bottle with?

1. Lenora Claire. I’m putting her on blast in a public forum now because I always do this when I see or speak to her anyhow. I just like to make her face turn red; what can I say? So yeah. I know this is almost too easy a choice – I mean, just look at her. But, I will go on record and state that I found her 1000 times more attractive once we had a few conversations. She is a dish and a catch through and through. Finally, a major part of the reason I choose her is that the hypothetical fantasy land you suggest would likely be the only place we could ever make out or spend Seven Minutes in Heaven anyhow since she’s practically my sister now. Ew. Thanks, Marie.

2. Annie Sprinkle. When I was a virgin, I considered proposing to her that I offer her up my virginity. I didn’t want it anymore, and I figured who else deserved it more than she? She is a sex-positive heroine goddess extraordinaire and I reckoned it would be a fair trade given that I was a young and repressed tangle of frazzled virgin nerves. Now that those days are long past, I still think she is a good choice because I wouldn’t scare her off with my cochino ways.

3. You. Yeah, you, the girl reading this. Whoever you are, wherever you are. Let’s play spin the bottle. And when it’s over, you’re going to pass out from blissful exhaustion. Then, I’m going to put your underpants in the freezer and your hands in warm water while you’re sleeping. Don’t test me, I might TP your house. Not kidding – I’ll fucking do it. Since you’re a DJ I have to ask you, what is on your Makeout Mix?

I have also received reliable, peer-reviewed feedback from some field subjects that the monkeywrench sound labs winter mix tape I made is good for make-outs and consequent romantic gropings in the dark. (PS – you can download it here – just right click and ‘save as’)

Please give us your Top 3 Savvy dating tips.

Basic. Most important number one: Dinner and a movie is over. Who even goes on this kind of date? Go with your date somewhere that requires hopping a fence, trespassing, talking your way out of an arrest, or a scavenger hunt – it’s so much more fun. Or else picnic somewhere 10 stories up and go to a guerrilla drive-in later if you gotta eat and watch a film together. You see, in unique sets of circumstances I believe we are much more likely to experience and observe who we really are than in some mundane by-the-numbers interaction we’ve seen a million times in lame movies. (Unless you want your life to be like a lame movie, in which case you get what you deserve).

Intermediate. When you really like someone, make him/her a mix tape. I know, everyone burns CDs these days, but even burned CDs I make for friends I will call “mix tapes” until the day I die. Deal with it. Anyways, yes. A mix tape. Take your time with it. Carefully consider the narrative and emotional arc of the song choices and playlist order. Make art or drawings or a collage for the case. It should be a total statement. That is, personalize it as much as possible. This is a time-honored gesture that will leave a lasting impression and provide the listener with an artifact revealing a moment of emotional perfection that s/he can revisit in perpetuity. Though ultimately, this artifact will become indispensably important for you both to refer back to when things have gone horribly awry. Or maybe you get lucky and play it at your wedding.

Advanced. Be open to and aware of the vast spectrum of possibilities at hand when it comes to forming an attraction. I think it is too easy for most to view their habits, past, and patterns as archetypical of the only type of person they are into or their ideal romantic situation. I don’t think life, and especially not love, works that way. In short, I too often see people overlook potential partners or situations that don’t fit into a specific pre-defined category, history, or expectation. Love doesn’t give a damn who you tend to be attaracted to (i.e. your “type”), or what kind of relationship you are looking for. Love is as arbitrary as it is specific. It can proliferate over time, it can strike at random, it is capable of anything. Love is chaotic – it laughs at our plans and our schemes. Sometimes we luck out and it fits like a missing puzzle piece, and sometimes we are presented an opportunity that challenges us and the paradigms under which we lead our lives. In love, all things are possible. There are as many ways to love as there have been people on Earth since time began. We have a lot of options and a lot to learn, so open up… And lastly, can straight guys genuinely just be friends with girls or are they trying to get into their panties eventually?

I think sexual tension is impossible to avoid – it’s just up to whomever is involved to decide how to manage it, ultimately. Notwithstanding, personal dynamics and chemistry also can shift, so it is also important to maintain awareness and flexibility lest two friends miss a mutually rewarding opportunity to date. My life experience has shown that the traditional hetero paradigm that “guys only want one thing” has been turned on its freakin’ ear anyway. That is, I have come to find that almost everyone is constantly trying to get in everyone else’s pants anyhow, so what’s the point in pretending it’s one-way? Girls and boys both are all just raging, sexually aggressive hormone bombs 95% of the time. I should state, for the record, that I am in full support of this trend. But, I also support maturity and healthy boundaries, so I personally tend to err on the side of prudence and restraint in my friendships with girls. In short, yes they can just be friends. At least I can. Then again, most straight guys would not want me as their spokesperson. That said, I also believe in breaking my own rules as much as I believe in following them.

You can find him spinning sexy tunes every 1st and 3rd Thursday of each month at Club Malabomba at the Bordello in downtown LA! 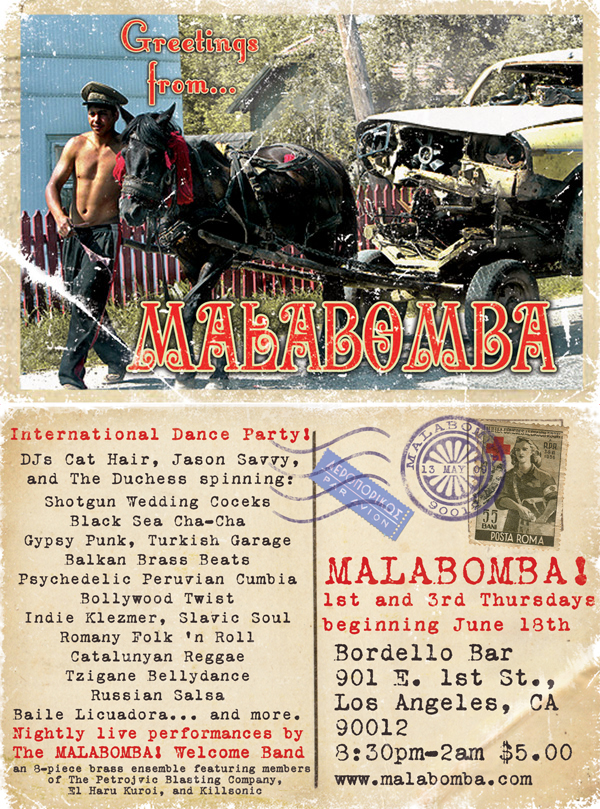