Has there ever been a certain piece of clothing you saw once and became almost obsessed with finding afterwards? My friend Nicki had been on an intense search for purple suede boots for a long time. The ones she originally wanted were at a ridiculous price of $200. BITCH PLZ. Luckily during a random shopping excursion to the local shops, my bargain radar found her a similar pair for about $25. I think you have to be careful when buying an article of clothing or accessory that is either trendy or not your usual style. Giving it a trial run by purchasing a cheaper version might be a wise move, before you end up spending all yo’ hard-earned paper on something that might be just be a personal passing fad. Wish I knew that back in ’02 when I thought I was cool buying THREE Dooney and Burke purses. HOW EMBARRASSING. I need to Ebay that shit away from me ASAP.

Nicki was excited to finally have her purple bootz, but then she was asking “WTF am I supposed to wear with them Marlow?” (My nickname if you didn’t know.) I kept telling her “something mustard!” but she’s afraid of it “looking too Lakers” and we all know my little problem with that. Unfortunately, we didn’t have time to do the nude portrait of Nicki wearing the boots like she requested, but I did a little Polyvorin’ for her grape-flavored boots using the Steve Madden ones and these are the oufits I came up with:

She loves American Psycho so I wanted to put together a menswear-inspired outfit, incorporating a pair of skinny grey jeans, another item she had recently acquired, and a vest ( which will most likely result in her being mistaken for Christian ‘Ferosh’ Siriano again, a true story.) She’s also growing out her hair so I’m trying to push feathery headbands on her during the annoying in-the-middle stage.

Nicki and I love peacocks and she has a beautiful tattoo of one on her right arm. The bird’s different colors would look great with the purple boots, especially if they are worn with a muted dress and then jazzed up with peacock-colored hair accessories and bracelets. I think an amber ring would be a cute addition. It reminds me of when I was nine and read this book about seeing the future. One of the things to do was to look at a piece of amber in the moonlight and you were supposed to see your true love so I did it with an amber ring. Whatta nerd.

We also love us some karaoke so I had to find an outfit for her to wear while she’s screaming some Danzig into a mic on a Friday night. A lil’ rock n’ roll style is easy to convey with those delish boots.

How excited am I to have succeeded in getting Nicki to read Twilight so I won’t have to watch the movie alone when it comes out? I was seriously going to wear a trenchcoat and some big sunglasses at a 10am showing, but now AS I WRITE THIS BLOG she is reading the book. Who woulda thunk lesbians would love Twilight too?? Hehe.

I would also love to see her in some latex leggings but she’s not too sure about that…yet. In the meantime I hope this helped you Micks! And If any of you sexies need my assistance in putting together an outfit, or you just want to tell me secrets or talk about hottiez, drop me a note at marie@agentlover.com! 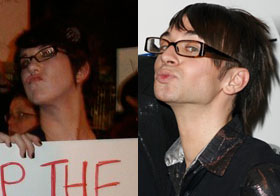