My tassel-twirling gal pal, Dizzy Von Damn!, shakes up the burlesque stage with her sequined sauciness and hilariously creative acts. It’s no wonder she was crowned Miss Viva Las Vegas 2008!  Let’s find out what makes this “bastard child of Bettie Page and Liberace” sparkle.

+ What attracted you to the burlesque scene in the first place?

I’ve always been interested in performing and lord knows I love dress up, but burlesque is also, to me, at its core a remarkable fusion of things that I was always told (if not explicitly) were mutually exclusive. I was tired of always having to choose one or the other- smart or pretty, funny or sexy, good or bad. I want to be seen as all of those things, because I am all of those things. There’s a wonderful tradition of power and beauty there; groups of women (and some men) entertaining and being as glamorous, sensual, or serious as they want to be. Plus, burlesque has a lot of sparklies.

+ How did you get your start in it?

I had been interested in doing it for years- I had seen a few shows in the Boston-area and done a little research on troupes there, but it never happened. I moved to LA and a couple of years ago I ended a long relationship and realized I had come out of it feeling even more fucked up than when I went in. I didn’t feel good about myself at all- emotionally, mentally, but really specifically physically. I was afraid of being not good enough, especially in a town like LA., and fuck that shit! I hate being afraid. I am not, however, afraid to be uncomfortable, so I decided that showing my goodies on stage, dressed how *I* felt beautiful, to music that made *me* feel sexy and fun was the most efficient way to get over myself. I didn’t like the way I was being perceived (or how I felt I was, anyways) so I changed it. Three days after I made that decision, I met Vixen Violette (my now bff) at a knitting group and she was my “in.” From knitting to stripping in 3 days flat. That will be my how-to book.

+ What can a person who has never been to a show expect on a typical night?

Well the obvious answer there is boobs. BEWBZ. There are many ways in which they can be seen though. Some of the performers do a classic bump n’ grind, some do more modern styles. I tend to take the classic style and make it a little weird, a little funny. There will be costumes and themes because each number is a show in itself. You might see a cowgirl or a cultural reference like a movie character. The guarantee is that you’ll be seeing each performer present that character in a tease, with several reveals that will advance the story of the number and put a little bit more on the stage. When I go to a show, I expect to be titillated and entertained; that’s how I like it. A little bit o’ honey, and a little bit o’ WTF honey?!?! 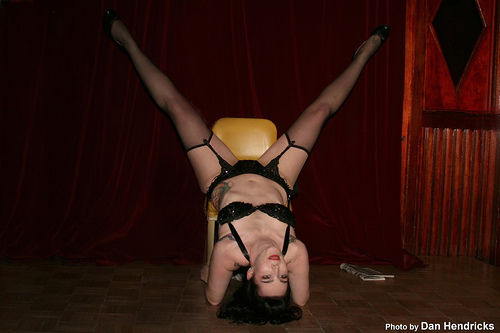 + Which famous burlesque performers from the past do you admire and influence your acts?

Gypsy Rose Lee is probably the most famous, and I admire her for being able to command an entire audience with just a look or a dropped strap. Each movement should be purposeful and I try to remember that. I am influenced in large part by many of the modern classics, who bring together classic burlesque and performance art. Catherine D’Lish is probably the best example of traditional burlesque today, totally sexy and making it seem effortless. Little Brooklyn and Trixie Little really bring the comedic aspects forward, and I love that as well. I aspire to be a combination I think. Hilariously sexy. Like banana hammocks.

+ What sorts of things do you drawn inspiration from? Film? Music? Anything else?

I pull inspiration from everything. Sometimes I’ll hear a song on the radio and see a whole number ready for the picking. Film and TV of course- I love musicals and anything technicolor. I want my performances (and, I suppose, myself) to be a little larger than life. The surreality of the show Pushing Daisies has been really inspirational of late. It’s very visually stimulating. All around me are the little things that just need to be repurposed. I have one act where I am a “newsie” and the props are newspapers; one of the most famous burlesque styles is the fan dance. I don’t know how it hit me exactly, but for that number, I do a fan dance with the newspapers, finally peeling away sheet after sheet for my final reveal. Everything is inspiration- just open your eyes.

+ Being the “Martha Stewart of Burlesque” what is your process for coming up with an idea for an act and then constructing the costumes and props for it?

Sometimes it starts with a song, sometimes it starts with a concept. Usually I have a bare bones idea and then I start throwing out the most ridiculous things I can think of that relate to it- and some of them stick. When I planned my number for Viva Las Vegas, I chose the song “Surfin’ Bird” because I knew its high energy would be a crowd-pleaser. To bring the bird theme through it, I added feathers to the costume in the form of a headdress and trim for the gloves. I also had a feather bustle that was actually a boa for me to remove and use when the time was right. As the date of the performance grew near, I realized there was nothing BIG about this number to really drive the bird theme home, so we started joking about a giant cage. Except before i knew it, it wasn’t a joke, so I ran out to Home Depot, did some crazy maneuvering and experimentation, and now I have a 6.5 foot glittering, gold, collapsible birdcage in a storage unit somewhere.

The most important thing to me is making everything belong. Every costume piece and prop should have a reason for being there, both to layer and to advance the theme. My “Only Have Eyes for You” number has eyeballs at every turn- and I won’t get too specific, but let’s just say that even the most minimal pieces of my costume “look” the part.

+ How would you describe your personal style when you are not on the stage?

I always dress with a vintage flair. I prefer to be a little covered up rather than letting it all out there, because the imagination is so much more effective. I love pencil skirts and daydresses with petticoats. I love to wear heels and do my hair up. I like bold color (probably 75% of what I own is a shade of teal) and patterns, and holy fuck i love sparkles. I’d say my personal style is probably a little loud and it definitely attracts attention, but I feel like it’s a good manifestation of my personality. I have these furry leopard print pedal pushers I like to wear on first dates because if a guy can’t love the pants, he certainly won’t love me. 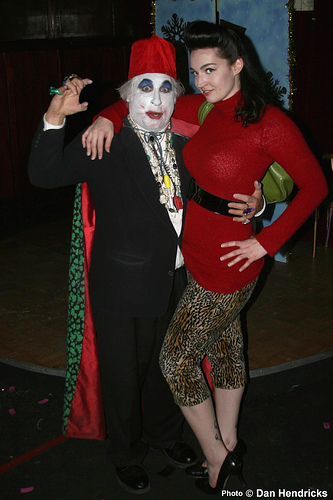 + What advice can you give someone who is interested in becoming a burlesque dancer?

Go to shows. Lots of them. Find local performers and ask questions. Look at the legends online. Do your research on names and acts- there’s a lot of information out there. Take a class if you can, from a performer you’ve seen and respect. Burlesque isn’t just you getting up on a stage and taking off your clothes. It’s a story, and like any story-teller you need charisma and a plot line with specific points to advance. Practice. It’s an evolutionary process, and anyone who tells you different is crazy. Commit. Be respectful, and don’t expect to be Dita overnight. Unless you’re that Evan girl, amirite?

+ What would you like to see happen in the future for the burlesque world?

I would love for burlesque to be acknowledged as a true art form instead of being written off so often as “just stripping.” Yes, there is stripping involved, but it’s not about my body, it’s about the presentation. I would love to see the Burlesque Hall of Fame in a permanent home, open to the public, to educate and protect our legacy. Of course it would be amazing to be able to make my living solely off performing, but that seems so difficult in a time so completely about instant gratification full of a million readily available TV shows and movies. And I want all burlesque performers to get a pony.

+ Is there anyone you love to work with or even perform an act with someday?

I’m really neurotic about shared numbers- it’s so rare to find someone with the same work ethic and let’s face it, I’m a little crazy. I’d want to run it into the ground. But if I did find someone with that ethic and a great idea? Absolutely. I’ve already worked with so many performers that I admire (including getting to do a show recently with Satan’s Angel), but it would be a real honor to perform at New York Burlesque Fest, Teasorama, or Miss Exotic World. Perhaps this is the year I apply. 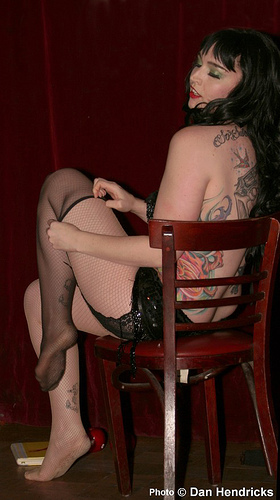 + What is coming up for Miss Dizzy Von Damn! as far as shows and any other projects?

I have shows booked through April 09 right now. Can you believe that? I don’t have time to do laundry. I’m looking forward to the “We Don’t Need Another Hero” Show at Monday Night Tease, this October 20th. I’m also about to do a photoshoot for the new L.A. Burlesque Calendar. I’d love to produce a show at some point, but I just don’t have the time right now. Keep an eye out for that though, because if/when it happens, it will be a doozy. You can always find out what I’m up to via http://www.dizzyvondamn.com, which right now is just a redirect to my myspace page, but will someday be an internet shrine to my pulchritude and benevolence. Eventually I will use it to take over the world.

What I Want For Me Birfday